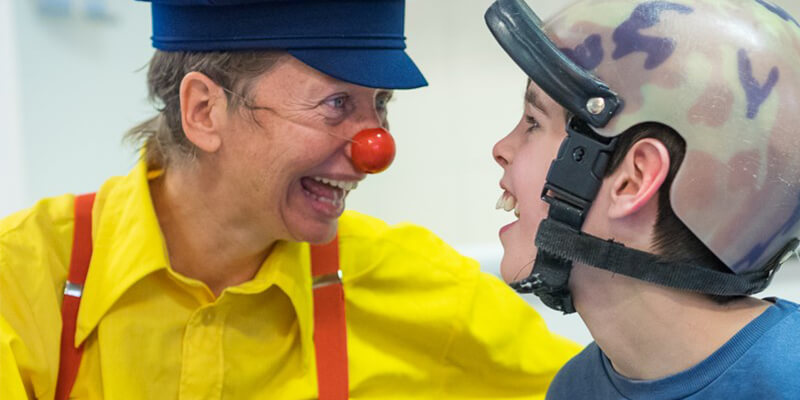 With the freshly started Clownexus project, which involves eight European Healthcare Clown Organisations, we aim to facilitate access to culture and artistic clown activities for vulnerable groups. The main beneficiaries are people living with dementia and children having to cope with autism spectrum disorder (ASD).

The 3-year project wants to tackle a lack of interactive artistic performances developed with and for people with dementia and children with autism spectrum disorder (ASD) – both having difficulties to get full cultural rights and access to cultural participation.

New artistic formats and approaches will be developed with the sensitive involvement of related stakeholders, like parents, families and caretakers, as co-creation methodologies are not in place for these target groups.

On World Autism Day we would like to dive deep into the needs of Children with Austism Spectrum Disorder (ASD).

Žarka Klopotan: Autism spectrum disorder is diagnosed multidisciplinary based on multiple medical, psychological, speech therapy assessments. Already in early infancy, signs can be seen that warn of autism in the areas of social interaction, communication, and behaviour.

Sandra Čavrak:  We will never know exactly. However, we know that people with ASD perceive everything that average people do with their senses, but it often happens that something is disturbed in sensory integration, so their responses to external stimuli or those from one’s own body completely unusual. For example, socks can bother them, some do not have a feeling of pain, and some often have a need for intense pressure, so they crawl under the mattress, for example…

Žarka Klopotan: Children with ASD can perceive the smallest details. They can observe an object in such a way that they are more focused on the details than overall. Children with ASD are visual thinkers. They experience the world in pictures. That is why it is important and necessary to use pictorial material in working with them. To some visual stimulant children with ASD may be hypersensitive and to some insensitive.

Sandra Čavrak: Every activity is an opportunity to learn. Eg. Painting with fingers or palms can be an introduction to the processing of a letter or an interpretation of a story. In addition, learning by movement is very important, as movement is directly related to speech development.

For the very first meeting with clowns, every child needs to be prepared very well by the teacher who knows the child very well and know what he or she likes or dislikes. Once a child gains a positive experience, he or she no longer needs preparation.

Žarka Klopotan: Children can learn through art by actively listening, observing, imitating, practicing, and expressing themselves. Art enables the development of observational abilities, analytical abilities and the ability to express oneself. In order for children with ASD to achieve this, they must be guided, taught, supported by methods that are appropriate for them. The approach must be individualized and based on visual-cognitive support and structuring of activities. Children with ASD should be motivated, there are few who have intrinsic motivation, motivation should be aroused and encouraged, and even maintained.

Sandra Čavrak: The core of our therapies is to promote harmony in the emotion, body and behaviour, which leads to enjoyment and relaxation. You should avoid tensions. We know that most people with ASD are deeply anxious, frightened by the world around them which they do not understand. The main goal of your work is to reduce anxiety to a minimum. Through music, movement, colour? This is less important.

Žarka Klopotan: Art reaches children with ASD if it arouses their interest and attention. Children love music! Music, movement, colours, dynamics, arouse their interest. Children with autism are in the first place children. Working with them still needs to be adapted to their intellectual status, communication and sensory characteristics.